Eleanor and John R. McMillan Professor of Geology and Geochemistry

Thermodynamic and kinetic models of magmatic processes including adiabatic mantle melting and melt transport; the role of water in petrologic and geodynamic behavior of the mantle; melting and differentiation in the deep mantle and the early earth; experimental investigation of silicate and metallic liquids and minerals under static and dynamic high pressure; petrologic and geodynamic processes at mid-ocean ridges and back-arc basins.

To learn about the Caltech shock wave laboratory, see the Lindhurst Laboratory of Experimental Geophysics website.

If you are looking for the alphaMELTS software package, see MAGMASOURCE.

If you want to learn about thermodynamic Phase Equilibria, visit my interactive online curriculum for visualization of free energy relationships in binary and ternary systems.

PI Viewpoint by Prof. Paul D. Asimow, February 20, 2017: "I stand with the Association of American Universities to urge a permanent end to the recent executive order -- and any future action by the current Administration -- that would bar individuals from certain countries from entering or returning to the United States of America. Previous administrations' visa policies have achieved their security goals while welcoming talented individuals from all parts of the world to study, teach, and carry out research in the USA. It is essential to our nation's well-being and to the progress of science in the USA and the world that this continues without interruption. International researchers — including undergraduates, graduate students, postdocs, and visiting scientists — are encouraged to apply to work with me and with my group to create knowledge that illuminates our planet and benefits all of humanity."

My group and I investigate the melting and crystallization of rocks and the influence of magmatic processes on the interiors of terrestrial planets (mostly Earth...). This research combines thermodynamic and quantum modeling, experimental investigation by static and shockwave techniques, and analysis of actual rocks from the world's oceans. The goal of all these studies is to characterize the mineralogy and melting of the top and bottom of earth's mantle, the formation of crust, and the nature of the core-mantle boundary, and to understand the role of these processes in the long-term differentiation and active heat engine of the earth. 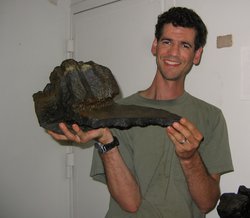 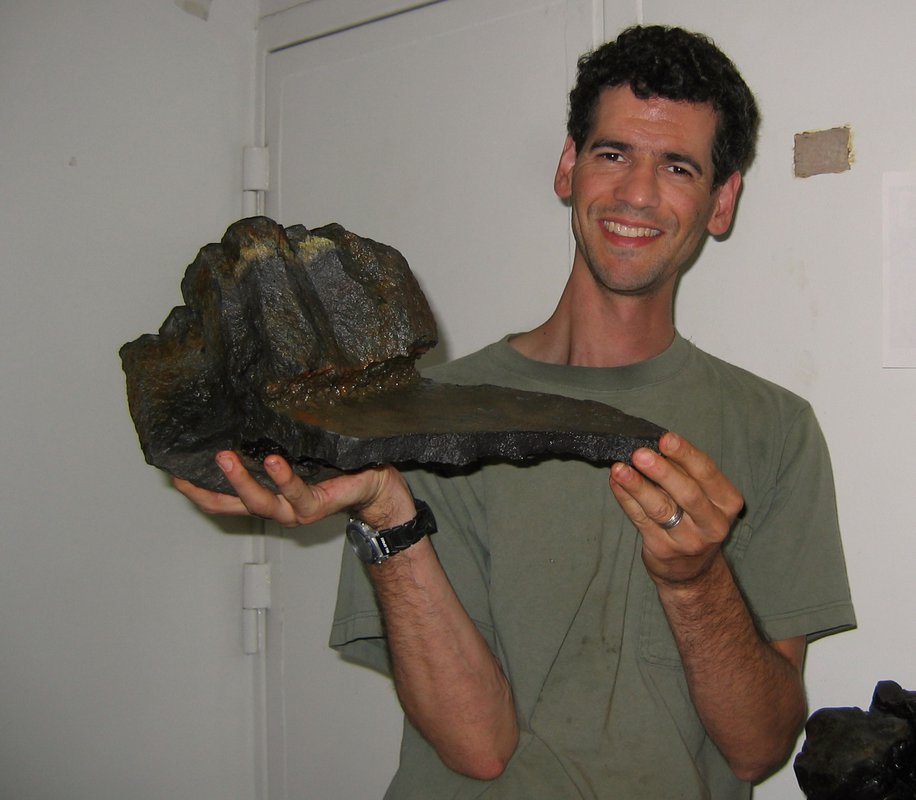 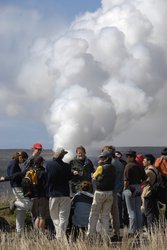 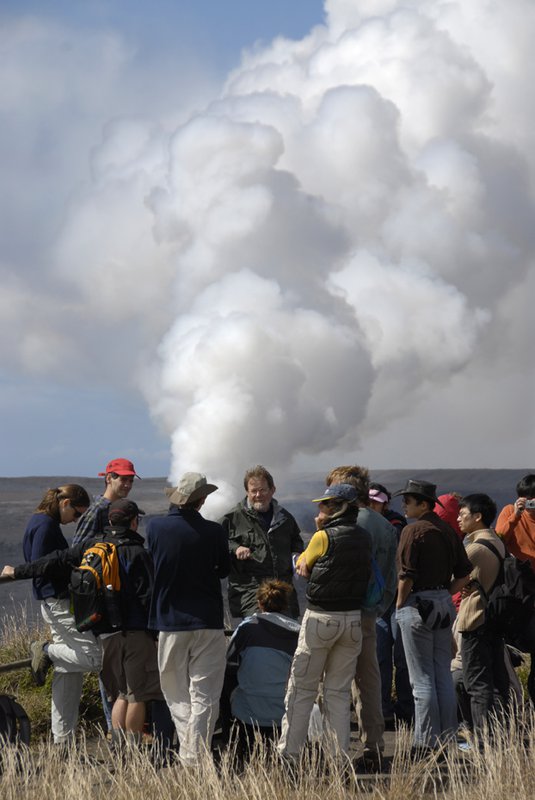 Classical thermodynamics is a fantastically useful tool for understanding high-temperature and high-pressure processes such as melting and crystallization of rocks. When temperatures are high enough and processes are slow enough that the approach to equilibrium is a reasonable description of natural behavior, then we can use all the architecture of chemical thermodynamics to go from simple laboratory measurements to detailed prediction of unobservable phenomena under extreme conditions. This idea underlies a considerable fraction of my computational and experimental work.

Most of our computational work in igneous petrology is carried out using a self-consistent thermodynamic model of silicate-liquid equilibria, MELTS and related models. We publish and maintain our own front-end to the MELTS, pMELTS, and pHMELTS models, alphaMELTS, which you can download for Windows, MacOS, or Linux. A variety of online tools related to computational petrology are maintained at the MAGMAsource website.

As an example of the kind of problem where thermodymamic modeling is essential, melting of the mantle by decompression at mid-ocean ridges and hotspots is a complex process. It takes place over a range of pressures and temperatures and may involve mutiple source compositions. The liquids are probably continuously extracted from the residue and mixed at some point during transit to the crust or in shallow magma chambers where the lavas differentiate before eruption. No single experiment can describe this entire process, so we use thermodynamically-based models of melting, melt migration, and fractionation to try to understand what information is encoded in data like crustal thickness and composition of basalts and peridotites.

One of our particular areas of focus is incorporating new ideas about the behavior of trace quantities of water in the mantle source region into melting models for normal and hotspot-affected mid-ocean ridges and back-arc basins. The discovery that water dissolves in nominally anhydrous mantle minerals and partitions into melts like a light rare-earth element led to the pHMELTS hybrid model that considers the effects of water on melting equilibria in dynamic, near-fractional polybaric melting regimes. 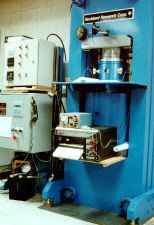 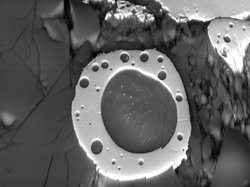 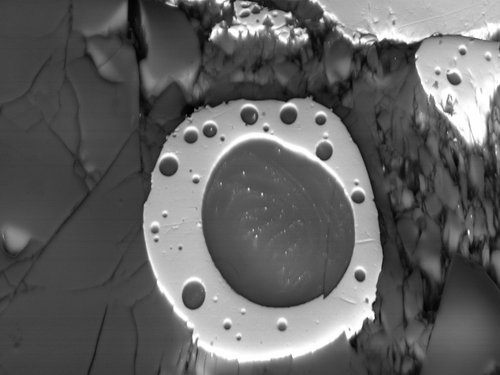 In order to access the pressure, temperature, and chemical environments that occur anywhere in the crust and upper mantle of the Earth, and to hold samples there long enough to approach equilibrium, we have a static high-pressure, high-temperature laboratory. This lab, which includes equipment shared with Professors Rossman and Stolper, includes a Rockland Research 1000 ton multianvil device, three piston-cylinder devices, two TZM hydrothermal systems, and 1-atmosphere gas-mixing furnaces. Together these technologies give us access to conditions up to at least 20 and perhaps 25 GPa and temperatures to about 2400 °C. We have developed large-volume cells for the multianvil experiments that allow us to make and recover intact samples several millimeters across from pressures above 14 GPa. We are pursuing studies of the solubility of water in mantle minerals, the partitioning of water among melts and minerals, the effect of water on peridotite melting, the thermodynamics of silicate liquids at high pressure, and synthesis of high-pressure mineral phases.

To reach more extreme conditions, such as those appropriate to the Earth's lower mantle and core, I operate the Lindhurst Laboratory for Experimental Geophysics, also called the Caltech GPS Shock Wave Lab. This unique facility was built by the late Professor Tom Ahrens and remains the only university-hosted light gas gun laboratory in the United States dedicated to geophysics and mineral physics.

My students and I are often engaged in numerous other studies, usually arising from collaboration with others scientists and students. This has included work on the (oxygen and iron) stable and (strontium and neodymium) radiogenic isotopic composition of mantle-derived basalts and crustal anatectic melts, the petrological evolution of precursors to ultra high-pressure metamorphic rocks, the synthesis and characterization of advanced thermoelectric materials, the application of quantum modeling methods to geological solid and liquid solutions, trace element and noble gas partitioning and diffusion, NMR spectroscopy of high-pressure glasses and minerals, incorporation of thermodynamic models into computational fluid dynamic models, and whether or not glacially-driven sea-level fluctuations influence mid-ocean ridge melt production! Again, see my reprints page for details.

James B. Macelwane Medal of the AGU
Frank Wigglesworth Clarke Medal of the Geochemical Society
Richard P. Feynman prize for excellence in teaching at Caltech

For PDF reprints of papers that may not be available from the links below, see my page at CaltechAUTHORS