Weather and Climate of the Planets

Twelve planetary objects with atmospheres have been visited by spacecraft. Earth is in an intermediate class as regards atmospheric density. It absorbs energy at a higher rate (power per unit area) than any other planet with an atmosphere, and it has the most unpredictable weather. Its large-scale weather patterns (jet streams) are also the most slow-moving of any planetary circulations.

The Moon and Mercury have ballistic atmospheres, consisting of individual molecules hopping across the surface. Io, Triton, and Mars have thin, fluid atmospheres whose properties are largely controlled by interaction with surface frost deposits that have the same chemical composition as the atmospheres. To various degrees, these atmospheres "freeze out" during the night and during the winter seasons. Io's atmosphere is so thin that its horizontal winds reach supersonic speeds as the gas expands into the vacuum on the night side. Titan and Venus are more Earth-like, in that the surface and atmosphere interact on longer (geologic) time scales. Atmospheric density is larger for these objects than for the Earth, and the circulations are predominantly zonal—the winds blow east and west. The giant planets—Jupiter, Saturn, Uranus, and Neptune—are fluid objects. There are no continents or oceans to interfere with the flow of gas in the atmosphere. The structures that one sees are fluid structures—patterns in the clouds made visible by condensation of trace constituents. The winds are huge—exceeding 400 meters per second (900 miles per hour) on Saturn and Neptune. And the largest storms, like the Great Red Spot of Jupiter, last for decades or centuries. Their complicated time-dependent behavior—mergings, oscillations, formation of streamers and cusps—can be simulated in numerical models when the right parameters are chosen as input.

In July of 1994, fragments of Comet Shoemaker-Levy/9 entered Jupiter's atmosphere with an energy equivalent to one million megatons of TNT. The Hubble Space Telescope observed waves spreading outward from the impact site. Their speed of propagation provided critical information about Jupiter's water cloud, which lies below the levels sensed by Voyager and Earth-based instruments. Exotic compounds from the comet and from Jupiter's deep atmosphere were visible in spectroscopic observations of the event.

In December of 1995, the Galileo probe entered Jupiter's atmosphere, sending back data on composition, winds, temperatures, cloud density, and light levels. The low abundance of water and the increase of wind speed with depth were two of the major surprises. Both surprises may be related to the unusual atmospheric dynamics at the probe site. Also in December 1995, the Galileo orbiter began its multi-year tour of Jupiter and its satellites. Some of the atmospheric science discoveries include the remarkable stability of the winds over 20 years since the Voyager era, the association of lightning with low-pressure systems, and the first observations of Jupiter's aurora in visible light. Lightning is an indicator of moist convection (thunderstorms), which may provide the energy for the larger structures like the Great Red Spot.

In 1997, the Mars Global Surveyor began its multi-year observations of Mars. The principal atmospheric objectives are to understand the cycles of carbon dioxide, water, and dust. In the north, several kilometers of water ice are covered every winter by a meter of carbon dioxide ice. In the south, the bulk composition could be either water ice or carbon dioxide ice. Dust affects the stability of the ice, and occasionally blots out the sun during a global dust storm. The mystery is why the dust storms occur at a specific time of year but not every year.

In December 2000, Cassini flew past Jupiter on its way to Saturn in 2004. With more sensitive instruments and more complete coverage in space and time than previous spacecraft, Cassini helps constrain the numerical models that seek to explain the high-speed jets and long-lived vortices that are so characteristic of these planet's atmospheres. 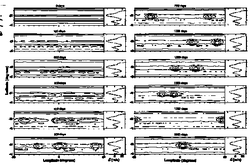 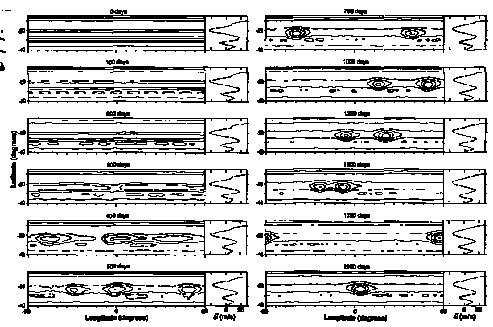 Computer simulation of the flow in Jupiter's southern hemisphere. The model integrates the shallow-water equations with zonally symmetric bottom topography. The latter is derived from the vorticity of fluid elements as they cross latitude lines. At each time step, the map shows pressure contours and the small insert to the right shows the zonal velocity profile, which is initially set equal to the Jovian profile. The sequence shows small vortices merging after the initial instability to form larger vortices, which eventually merge into a single large vortex at the latitude of the Great Red Spot. Reprinted from Dowling and Ingersoll (1989).