A data-processing artifact may be responsible for evidence cited in a 2015 report that cold salty waters are responsible for forming seasonally dark streaks on the surface of Mars, according to a new study from Caltech.

The study, published online on November 9 by the journal Geophysical Research Letters, shows that a filtering step in the processing of data from the Compact Reconnaissance Imaging Spectrometer for Mars (CRISM) aboard the Mars Reconnaissance Orbiter (MRO) can, in rare circumstances, lead to signatures that mimic the appearance of certain minerals, including perchlorate—a salt whose presence would imply the existence of cold, salty waters at the surface of Mars.

MRO has been orbiting Mars since 2006, and during that time, CRISM has been capturing images of visible and infrared light reflected from the planet's surface. Different minerals absorb light at different wavelengths and so the fingerprints of the reflected light provide clues about what minerals might be present at a given location.

In 2015, scientists analyzing CRISM images found absorption patterns in a few pixels of the images that appeared to indicate concentrations of perchlorate. The pixels where CRISM detected perchlorate were associated with seasonally changing dark streaks on the slopes of Martian craters (formally named "recurring slope linae," or RSLs), sparking the idea that the dark streaks were, in fact, caused by salty flowing liquid water. The existence of perchlorate brines on Mars has been the subject of speculation and debate ever since.

While analyzing CRISM images of the potential landing sites for the Mars 2020 rover, the Caltech-led research team noted the same strong perchlorate-like signatures in a few of the pixels. That team, led by Bethany Ehlmann, professor of planetary science at Caltech and research scientist at JPL, includes Caltech graduate student Ellen Leask and Murat Dundar, an associate professor at Indiana University-Purdue University Indianapolis.

"Potential residues of salty perchlorate waters at Mars 2020 landing sites would have been big news. We were about to report it, but I wanted to take a second look at the data," says Ellen Leask, lead author of the study.

The second look led to a vigorous analysis, conducted over a year with the CRISM team at the Johns Hopkins University Applied Physics Laboratory, that revealed that when CRISM data are processed, certain "noisy" pixels that occur at the boundary between the light and dark part of an image can be misinterpreted. These pixels have errant spikes in their absorption patterns that, coupled with the signature of carbon dioxide in Mars' atmosphere, are processed in such a way that the end result mimics the absorption pattern from certain hydrated minerals. Those minerals include alunite, kieserite, serpentine, and especially perchlorate, all of which are characteristic of wet environments. The team found the error occurs in less than 0.05 percent of the pixels in all of the CRISM images and only affects very small spots in the images (covering less than 12 pixels).

"Ellen's careful sleuthing revealed this issue," Ehlmann says. "It's a case study in the importance of critical skepticism of even one's own data."

The study is titled "Challenges in the Search for Perchlorate and Other Hydrated Minerals with 2.1-μm Absorptions on Mars." Scott Murchie and Frank Seelos of the Johns Hopkins University Applied Physics Laboratory are also coauthors. This research was funded by the Natural Sciences and Engineering Research Council of Canada, NASA, the Rose Hills Foundation, and the National Science Foundation. 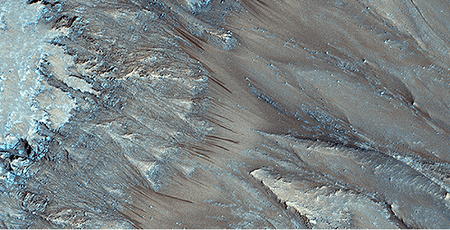 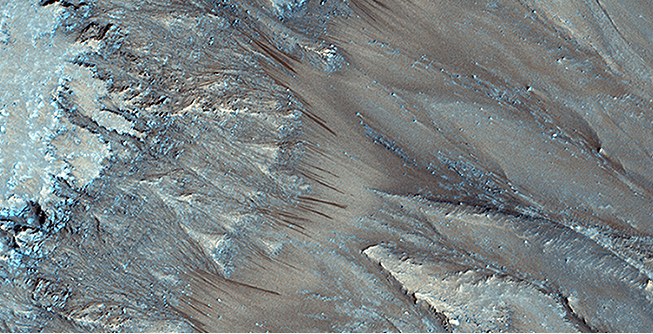