This image was captured by the cameras on board the rocket's upper stage as the telescope separated from it.
Credit: Arianespace, ESA, NASA, CSA, CNES

On December 25, the largest and most powerful space telescope ever constructed by NASA was successfully launched from Earth.

With unprecedented technology, the James Webb Space Telescope (JWST) will peer both near and far, from the planets and bodies in our solar system to the deepest reaches of space, where the first stars and galaxies formed more than 13 billion years ago. JWST has a mirror that is 21.3 feet (6.5 meters) across, making it physically much larger than the Hubble Space Telescope and Hubble's infrared sister telescope, the Spitzer Space Telescope, operated by Caltech's IPAC; it also has state-of-the-art photon detectors that register a wider range of wavelengths and enable deeper and more detailed views than Spitzer.

The launch represents a major milestone for the project, which began construction back in 2004. After launch, the telescope will begin a one-month odyssey to its observing perch beyond the moon, an orbital location in space called the second Lagrange point or L2, which is about 1 million miles from Earth. Once there, JWST will complete a six-month process of post-launch commissioning: it will unfold its mirrors, sun-shield, and other systems, and cool down, align, and calibrate.

"With the Mars missions, they have something they call the 'seven minutes of terror'—the time window in which everything has to happen precisely for the landing," says Charles Beichman, senior faculty associate in astronomy and director of the NASA Exoplanet Science Institute at Caltech. "For JWST, it's a sort of 29 days of anxiety for everything to happen perfectly."

Beichman, whose primary research focus is planets outside our solar system, or exoplanets, is a member of the science team for one of JWST's instruments, the Near Infrared Camera (NIRCam). NIRCam will detect light from the earliest stars and galaxies as they are in the process of formation as well as from populations of stars in nearby galaxies; young stars in our Milky Way galaxy; planets orbiting nearby stars; and Kuiper Belt objects at the fringes of our solar system. Using a set of coronagraphic masks developed at the Jet Propulsion Laboratory (JPL), which Caltech manages for NASA, to block the bright glare of host stars, Beichman and the NIRCam team will search for Saturn-sized exoplanets orbiting bright, nearby stars including epsilon Eri and Vega.

NIRCam is one of four major JWST instruments to observe the sky in various wavelengths. The other three are the Mid-Infrared Instrument (MIRI), which will observe the light of distant galaxies, newly forming stars, and faintly visible comets as well as objects in the Kuiper Belt; the Near InfraRed Spectrograph (NIRSpec), which will perform high-resolution spectroscopic observations of 100 cosmic objects simultaneously; and the Fine Guidance Sensor/Near Infrared Imager and Slitless Spectrograph (FGS/NIRISS), which will conduct lower-resolution spectroscopic measurements to characterize the light from the universe's first stars as well as exoplanets. The MIRI instrument was co-developed by JPL and the European Space Agency.

Once the telescope has finished its setup, Caltech researchers are already among those approved to conduct observations. In collaboration with Professor of Astronomy Dimitri Mawet, who is also a JPL research scientist, and Caltech postdoctoral scholar Jorge Llop Sayson, Beichman and an international team of scientists have received approval to observe Alpha Centauri, the closest sun-like star to the earth, and determine if it has a planet orbiting around it—specifically, a gas planet around the size of Jupiter. Future telescopes may be able to look for even smaller planets. Alpha Centauri is only 4.3 light-years away from Earth.

Another major goal of the telescope will be to characterize the composition and physical properties of exoplanets. Along with a team led by graduate student Michael Zhang (MS '18), Caltech Professor of Planetary Science Heather Knutson will use the MIRI instrument to study an ultra-hot planet smaller than the earth whipping around a nearby star in an eight-hour orbit.

Other observers are planning to use the MIRI instrument to observe Earth-sized planets in the TRAPPIST-1 system explored by the Spitzer Space Telescope to characterize the atmospheric compositions of potentially habitable Earth-like planets for the first time. Overall, Caltech and JPL exoplanet researchers, including postdoctoral scholar Jessica Spake, visiting associate Renyu Hu, also of JPL, and JPL researcher Tiffany Kataria, were collectively successful at receiving JWST time to study exoplanets. In addition to exoplanet studies, Caltech scientists will use JWST to make cosmological measurements and study distant galaxies.

For example, IPAC Staff Scientist Andreas Faisst and his team will use the NIRCam and MIRI instruments to study a patch of sky nicknamed COSMOS. Few stars and no clouds of gas in our galaxy block our view of this area; it was famously imaged by Hubble and Spitzer, and follow-up data from the Keck telescopes and other ground-based observatories were obtained, to study how galaxies are influenced by both their fundamental physical properties and the environment that surrounds them—a kind of study of nature and nurture in galactic development.

"JWST is expected to expand on that work by providing imaging data at unprecedented spatial resolution to study the structure of far-away galaxies and local places of star formation in them, and to find and characterize the very first galaxies in our universe from more than 13.5 billion years in the past," says Faisst. "In addition, it will revolutionize our understanding of the universe's most massive galaxies, and in particular answer the question why some of them have stopped forming stars."

Beichman emphasizes that JWST is transformative in its capabilities to study a wide range of objects near and far, from those in our solar system to the most distant parts of the universe. "It will serve the entire astronomical and solar system communities with unprecedented capabilities," he says. "Compared to any previous telescope, ground- or space-based, JWST has a revolutionary ability to take both images and spectra at infrared wavelengths." 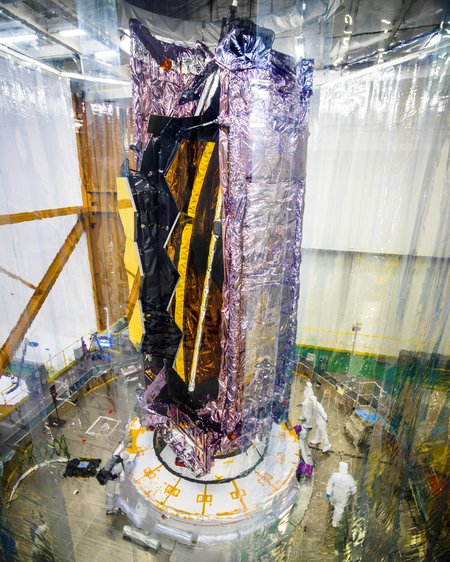 Getting ready for launch: This image shows the James Webb Space Telescope atop its launch vehicle, but before it was encapsulated in the rocket fairing. You can see a protective clean tent around the telescope. Find more images of JWST here: https://jwst.nasa.gov/content/multimedia/images.html Credit: NASA/Chris Gunn
Image Lightbox 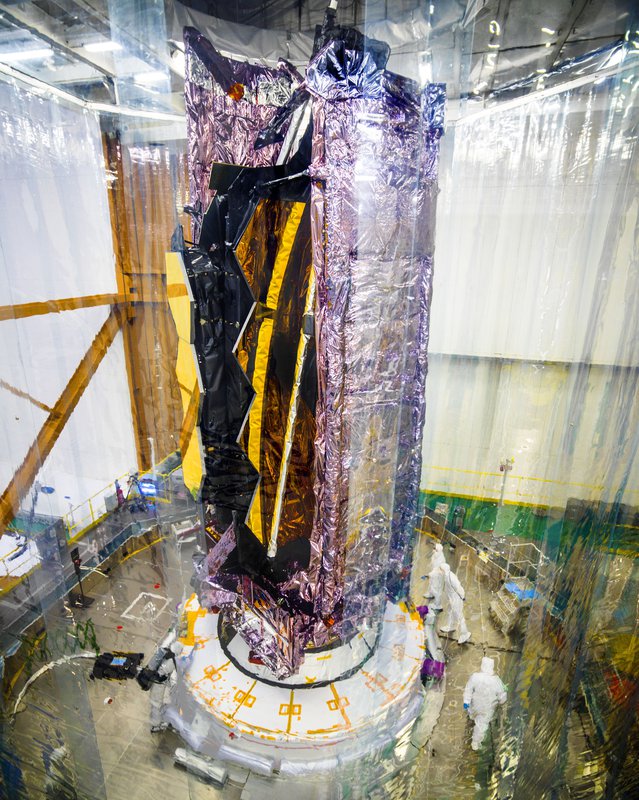 Getting ready for launch: This image shows the James Webb Space Telescope atop its launch vehicle, but before it was encapsulated in the rocket fairing. You can see a protective clean tent around the telescope. Find more images of JWST here: https://jwst.nasa.gov/content/multimedia/images.html
Credit: NASA/Chris Gunn
Download Full Image
Subscribe
The Caltech Weekly