How Long Does a Neutron Live?

Physicists use "bottle" method to make most precise measurement yet of a neutron's lifetime.

Particles called neutrons are typically very content inside atoms. They stick around for billions of years and longer inside some of the atoms that make up matter in our universe. But when neutrons are free and floating alone outside of an atom, they start to decay into protons and other particles. Their lifetime is short, lasting only about 15 minutes.

Physicists have spent decades trying to measure the precise lifetime of a neutron using two techniques, one involving bottles and the other beams. But the results from the two methods have not matched: they differ by about 9 seconds, which is significant for a particle that only lives about 15 minutes.

Now, in a new study published in the journal Physical Review Letters, a team of scientists has made the most precise measurement yet of a neutron's lifetime using the bottle technique. The experiment, known as UCNtau (for Ultra Cold Neutrons tau, where tau refers to the neutron lifetime), has revealed that the neutron lives 14.629 minutes with an uncertainty of 0.005 minutes. This is a factor of two more precise than previous measurements made using either of the methods. While the results do not solve the mystery of why the bottle and beam methods disagree, they bring scientists closer to an answer.

"This new result provides an independent assessment to help settle the neutron lifetime puzzle," says Brad Filippone, the Francis L. Moseley Professor of Physics and a co-author of the new study. The methods continue to disagree, he explains, because either one of the methods is faulty or because something new is going on in the physics that is yet to be understood.

"When combined with other precision measurements, this result could provide the much-searched-for evidence for the discovery of new physics," he says.

The results can also help to solve other long-standing mysteries, such as how matter in our infant universe first congealed out of a hot soup of neutrons and other particles. "Once we know the neutron lifetime precisely, it can help explain how atomic nuclei formed in the early minutes of the universe," says Filippone.

In 2017 and 2018, the UCNtau team performed two bottle experiments at the Los Alamos National Laboratory (LANL). In the bottle method, free neutrons are trapped in an ultracold, magnetized bottle about the size of a bathtub, where they begin to decay into protons. Using sophisticated data analyses methods, researchers can count how many neutrons remain over time. (In the beam method, a beam of neutrons decays into protons, and the protons are counted not the neutrons.)

Over the span of the experiments, the UCNtau collaboration counted 40 million neutrons.

To remove any possible biases in the measurements, caused by researchers consciously or unconsciously skewing results to match expected outcomes, the collaboration split into three groups that worked in a blind fashion. One team was led by Caltech, another by Indiana University, and another by LANL. Each team was given a fake clock, so that the researchers would not actually know how much time had elapsed.

"We made our clocks purposely a little off by an amount that somebody knew but then kept secret until the end of the experiment," says co-author Eric Fries (PhD '22), who led the Caltech team and performed the research as part of his PhD thesis.

"This makes the experiment more reliable because there's no chance of conscious or unconscious bias in fitting the results to match the expected neutron lifetime," adds Filippone. "Thus, we don't know the actual lifetime until we correct for this at the very end during the 'unblinding.'"

One challenge in the study of stray neutrons is that they can easily bind to atoms, says Filippone. He notes that atomic nuclei in the experimental apparatus can readily "eat up the neutrons like Pac-Man." As a result, the researchers had to create a very tight vacuum in the chamber to keep out unwanted gases.

They also had to dramatically slow down the neutrons so that they can be trapped by magnetic fields and counted.

"We have to cool these neutrons down through various steps," says Filippone. "The key step at the end is to make the neutrons interact with a solid frozen chunk of deuterium [a heavier version of hydrogen] about the size of a birthday cake, which causes the neutrons to lose energy."

Once the experiments were done and the data were collected, each of the three teams used different approaches to analyze the data. Fries and the Caltech team used machine learning methods to help count the neutrons. "The tricky part is to look at the individual data points and say, yes, that is in fact a neutron," says Fries.

When all three teams unblinded their results, they found a remarkable level of agreement. "We all dealt with the data differently but came up with nearly the same answer, with differences that were less than the overall statistical error," says Fries.

In the end, the neutron lifetime was calculated to a precision better than 400 parts per million, making it the most precise result yet. Future experiments are underway to help further refine measurements made using the beam method and to ultimately determine whether systematic errors or new physics are behind the neutron-lifetime mystery.

The paper, titled, "An improved neutron lifetime measurement with UCNtau," was funded by the LANL, the U.S. Department of Energy, the National Science Foundation, and the National Institute of Standards and Technology. 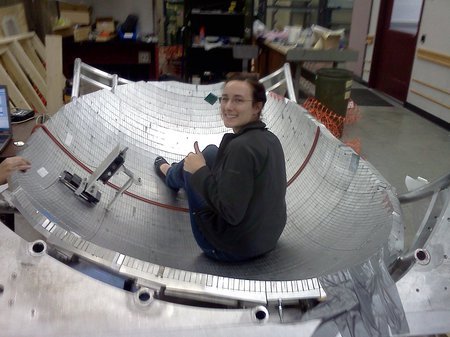 Bailey Slaughter, who formerly worked on the UCNtau project while an undergraduate student at Indiana University, is seen here performing work inside the trap, or "bottle," used to count the lifetime of neutrons. Credit: Chen-Yu Liu 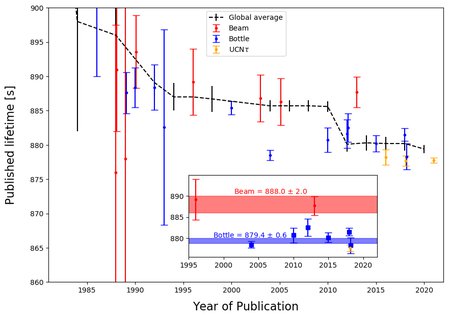 A comparison of neutron lifetime results from several experiments performed since the early 1980s. Beam experiments are shown in red, and bottle in blue. The UCNtau project's recent results, which are the most precise yet, are shown in yellow and indicate a neutron lifetime of 877.75 seconds with an uncertainty of .34 seconds. Credit: Eric Fries/Caltech
Image Gallery Lightbox 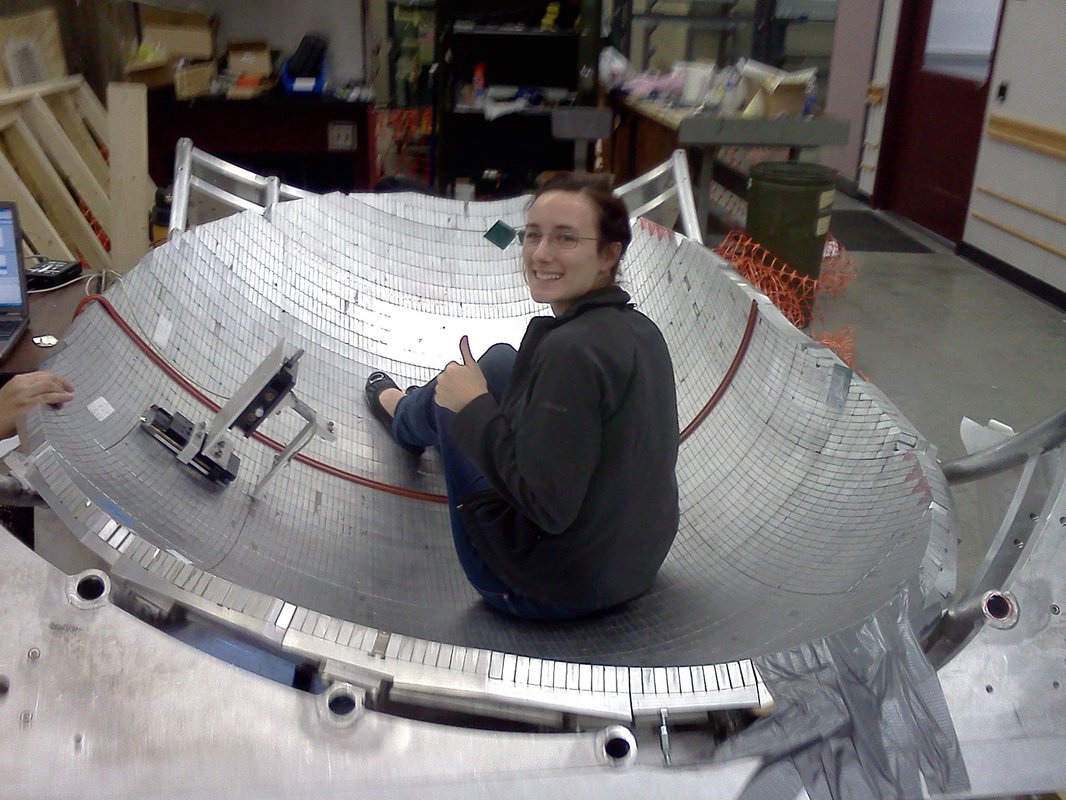 Bailey Slaughter, who formerly worked on the UCNtau project while an undergraduate student at Indiana University, is seen here performing work inside the trap, or "bottle," used to count the lifetime of neutrons.
Credit: Chen-Yu Liu
Download Full Image 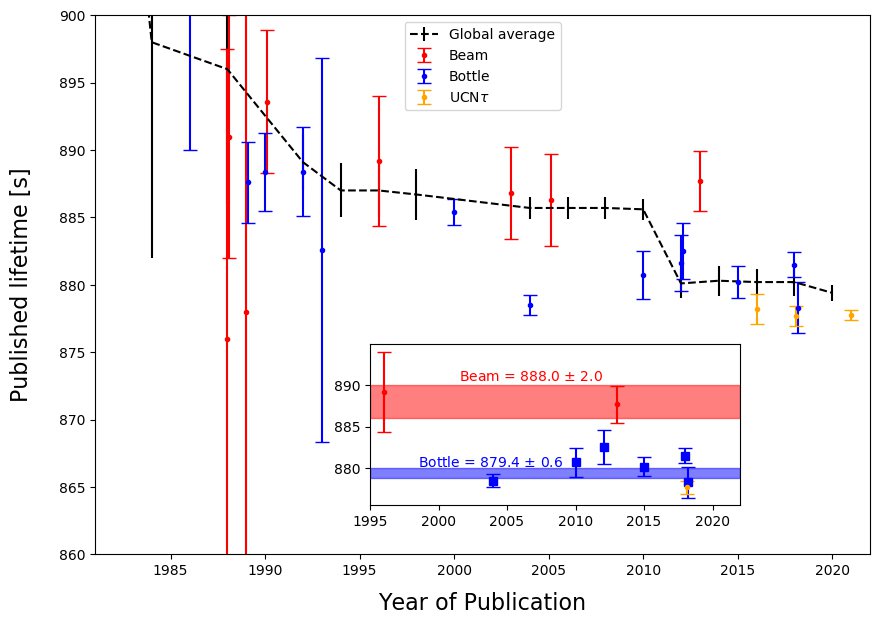 A comparison of neutron lifetime results from several experiments performed since the early 1980s. Beam experiments are shown in red, and bottle in blue. The UCNtau project's recent results, which are the most precise yet, are shown in yellow and indicate a neutron lifetime of 877.75 seconds with an uncertainty of .34 seconds.
Credit: Eric Fries/Caltech
Download Full Image 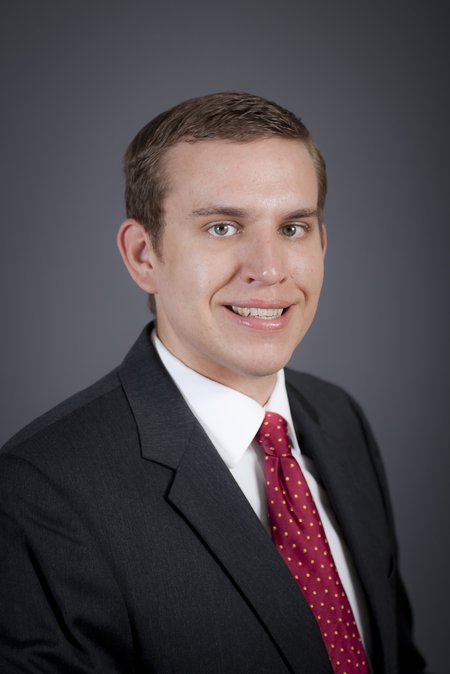 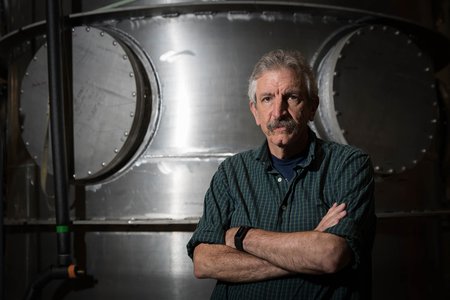 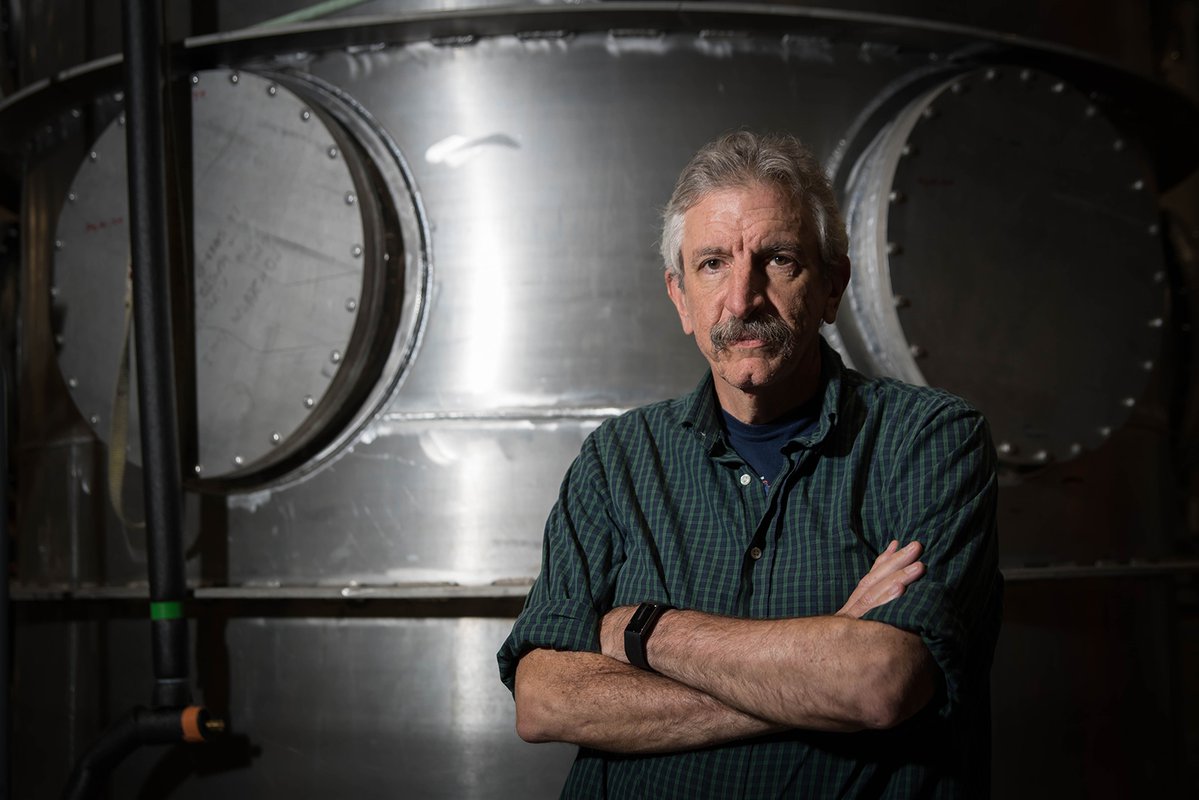