How an "Antibiotic" Helps Bacteria Eat

For years, scientists have known that certain bacteria produce molecules that are toxic to other bacteria when there is competition for food and space. Now, Caltech researchers have discovered these so-called antibiotics have another purpose: they help the bacteria acquire essential nutrients when resources are scarce.

The research was done in the laboratory of Dianne Newman, Gordon M. Binder/Amgen Professor of Biology and Geobiology and executive officer for biology and biological engineering, and is reported in a new paper appearing in the journal Science on March 5. The study was conducted by postdoctoral scholar Darcy McRose.

The research focused on species of bacteria in the Pseudomonas genus, and molecules they produce called phenazines. Newman's laboratory has studied phenazines and their chemical and biological properties for nearly two decades.

"We've known that these Pseudomonas 'antibiotics' can kill competitors, but we wanted to answer: Are there other functions or benefits for the organism to produce phenazines?" says McRose.

While the Newman lab has identified a variety of roles for these molecules over the years, Pseudomonas species do not always produce phenazines, so McRose began by studying the conditions under which the microbes do produce the molecule. She found that Pseudomonas produces phenazines when the microbe has limited amounts of bioavailable phosphorus in its environment. Phosphorus is a necessary nutrient for all life and can come in many chemical forms. It is considered "bioavailable" when it is present in a form that living things can use. As an analogy, grains of wheat cannot be consumed by humans as food, but they can be digested in the form of flour baked into bread. In a similar way, phosphorus that is bound to the surface of iron minerals is difficult for bacteria to access, and needs to first be released.

McRose wanted to know if there was some connection between shortages of bioavailable phosphorus and the production of phenazines. Prior research from the Newman lab had shown that phenazines can mediate a chemical reaction in which iron oxides, a common component of soil, are dissolved; McRose demonstrated that this also can release attached phosphorus, making it bioavailable. In experiments, she took synthetic iron oxides with phosphate attached to them as well as natural sediments containing phosphate bound to iron oxides, added phenazines, and saw that the amount of bioavailable phosphorus increased.

Then, McRose conducted experiments with a genetically altered strain of Pseudomonas that could not produce phenazines. She grew these mutated microbes in an environment with phosphorous only present as bound to iron minerals, and compared them to non-mutant Pseudomonas in the same environment. The normal bacteria were able to grow and survive, presumably by using phenazines to acquire phosphorus from the iron minerals. However, the mutant Pseudomonas strains that could not produce phenazines did not grow as well.

Phosphorus is not required by just Pseudomonas; it is an essential nutrient for all life to survive, including agricultural plants. Understanding the relationships microbes like Pseudomonas have with phosphorus in its myriad forms and the role the microbes play in making phosphorus available to the biosphere is important for making sustainable decisions, for example, about the usage of fertilizer, the researchers say.

"This work merges old observations about when certain types of antibiotics are produced with our understanding of their chemical reactivity," says Newman. In addition, the work improves the understanding of the microscopic relationships happening in the soil at the roots of plants.

"It is exciting to uncover a vital role for these compounds in macronutrient acquisition. Going forward, we hope to leverage this understanding to explore more sustainable ways to promote phosphorous bioavailability in agricultural fields," Newman adds.

The paper is titled, "Redox-active antibiotics enhance phosphorus bioavailability." The work was funded by the Army Research Office and the National Institutes of Health. McRose was funded by a Simons Foundation Postdoctoral Fellowship in Marine Microbial Ecology as well as a Division Fellowship from Caltech's Division of Biology and Biological Engineering. 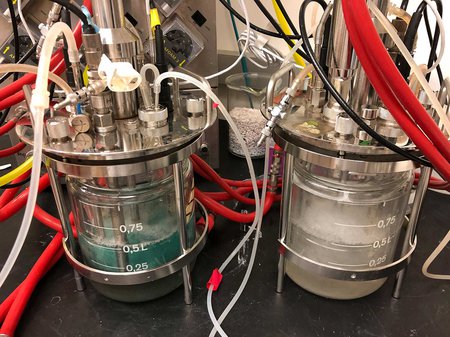