I am a chemical oceanographer interested in using trace metals as tracers of environmental processes. Most of my current work is centered around the geochemical investigation of past climates. I am primarily concerned with the last few glacial/interglacial cycles that span a few hundred thousand years. It is in this time range that we have both a relatively accurate and precise understanding of age models (though they are always improving) together with large climatic shifts that require mechanistic explanation. In particular, we have an amazing record of the rapidity and magnitude of climate change from polar ice cores. The figure below shows the record of oxygen isotope variation, a proxy for air temperature, at the Greenland Summit over the past 110,000 years. The last 10,000 years, the Holocene, is marked by relative climatic stability when compared to the preceding glacial period where there are large and very fast transitions between cold and warm times. As an oceanographer, I try to understand the coupled ocean/atmosphere system during these shifts by monitoring the deep ocean's behavior. Much of my work to date has focused on developing a new climate archive, deep-sea corals, that has the potential to revolutionize the types of information we can obtain about oceanographic climate change. I describe below five projects, currently underway in my laboratory, that are related to better understanding the mechanisms of rapid climate change and climate evolution. 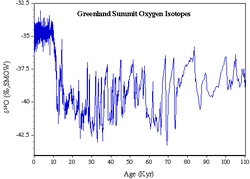 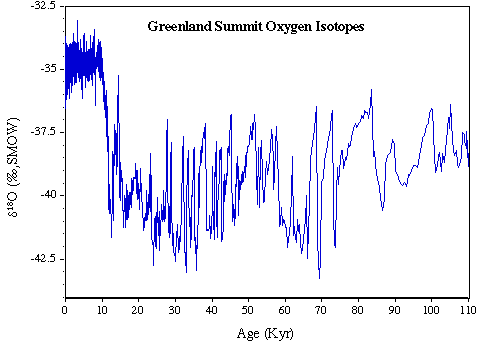 Ice core records of the last 110,000 years, like the one above, reveal that we are living in a unique time where the climate has been relatively stable. Glacial times, however, are marked by rapid and large amplitude changes in atmospheric temperature, snow accumulation at high latitudes, and a variety of other climatic variables. On orbital time scales, studies from deep-sea sediments have shown a clear link between deep ocean circulation patterns and global climate change. As the deep ocean contains nearly all of the mass, heat capacity and carbon in the ocean/atmosphere system, it is of vital interest to extend this understanding to times of rapid climate change. Deep-sea corals offer a unique opportunity to constrain this oceanic behavior. Individual specimens of the coral D. cristagalli (see figure) live for decades to hundreds of years and have visible banding patterns that appear to be deposited annually (though this is still under investigation). We now have a library of samples that include corals from the past 100,000 years.

By developing precise high-resolution sampling using lasers and Inductively Coupled Plasma-Mass Spectrometry, we are trying to actualize the potential of this new archive and generate high-resolution records that match or exceed the ice cores' fidelity.

Click here for a large detailed image. A new browser window will open to display the larger image; close it to return here. Warning: image is very large.

Rate of Deep-Sea Overturning in the Past

Modern chemical investigations of ocean circulation rates rely heavily on measurements of Δ14C, the radiocarbon content of a water mass. This radioactive tracer allows us to calculate the ventilation age, the time since the deep water last "saw" the atmosphere. However, generally in paleoclimatology, radiocarbon is our chief chronometer and therefore can not be used as a tracer itself. Fortunately deep-sea corals are both rich enough in Uranium and low enough in detrital Thorium that they can be independently dated to very high precision. Coupled U-Th and 14C dates from the same sample free radiocarbon from being our sole age control and allow the calculation of past deep water Δ14C. Just as it is used in the modern ocean, this measurement can be directly related to ventilation age and therefore past circulation rates. Combined age measurements take us from mapping the volumes and distributions of past deep-water masses to actually understanding the dynamics associated with oceans in past climate states. We are beginning to do paleo-physical oceanography. 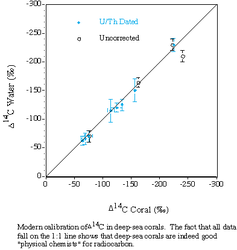 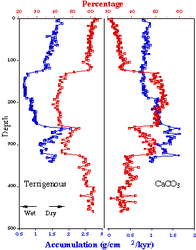 Measurements of the concentrations of sediment materials down core is often more usefully interpreted if they can be converted to actual accumulation fluxes. Often the percentage of one major core component, which had a constant rain to the sediment, can vary down core due to changes in another component. For instance, carbonate production in the surface waters can be constant through time while the dust flux displays large variability. Percentage measurements of the two species down core will both show variation, solely due to the changes in dust flux. Since the actual carbonate rain was constant, percentage data confuse the interpretation of water column production through time.

This problem can be neatly overcome by normalizing to a measured initial excess of 230Th. Thorium is so insoluble in seawater that virtually regardless of the total particle rain to the sea floor all of the 230Th produced by 234U decay is scavenged out of solution. As the Uranium concentration is conservative (it only varies with salinity), the 230Th rain rate is both constant and known through time. This feature of Th marine chemistry means that its concentration in the sediment only varies as the sediment rain rate and can therefore be used to convert percentage measurements into true accumulation fluxes. We have been using these measurements to monitor surface water production variations and atmospheric dust deposition rates at both the Bermuda Rise (in collaboration with Lloyd Keigwin of WHOI and Ed Boyle of MIT) and off the coast of Africa (in collaboration with Peter deMenocal and Joe Ortiz at the Lamont-Doherty Earth Observatory). The figure below shows how variations in the terrigenous accumulation at our site both induces changes in the %CaCO3 and masks times of actual CaCO3 accumulation changes. The data also show that transitions into and out of the African Humid period are abrupt and fundamentally different than the gradual insolation forcing over this time period.

Pore Water Records of Past Deep-Ocean Salinity and δ18O 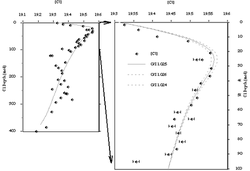 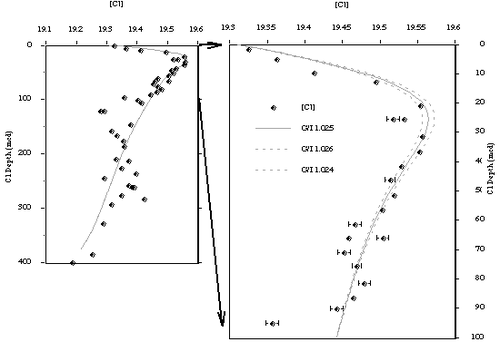 At the last glacial maximum enough ice was stored on land to increase global ocean salinities by about 3.2%. The combined record of this global change as well as local variations in salinity due to deep-water mass movements is preserved in sediment pore waters as broad [Cl] and δ18O peaks. Due to diffusion and compaction induced advection this [Cl] peak typically has an amplitude of about 1.0-1.5% today. With precise (±0.05%) measurements made at high depth resolution, this remnant peak can be used to constrain a 1-D pore water model of the history of bottom water salinity over the last glacial cycle. The result from this model allows us to reconstruct the Last Glacial Maximum bottom water salinity and δ18O. Coupled with benthic foraminiferal measurements of δ18O we can constrain the past deep temperatures for all of our sites. The figure above shows the results for a profile taken from the Bermuda Rise in the deep Western Atlantic. Our data imply that the waters at this site were 4.6±1.0°C cooler at the LGM than they are today. This places the water mass at or near the freezing point (click here for our GRLpaper on this subject). δ18O measurements were made by Prof. Dan Schrag in his lab at Harvard University. Together with Kate McIntyre (a post-doc here at CIT), we are continuing this project for sites from around the world's oceans in an attempt to reconstruct LGM temperature and salinity for a large part of the water column. 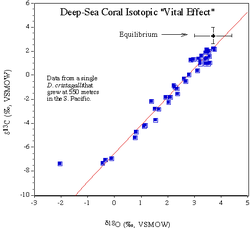 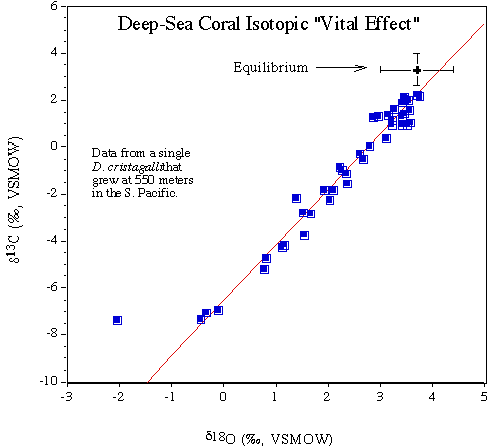 For decades it has been recognized that many biogenic calcium carbonate minerals do not precipetate at isotopic equilibrium for oxygen and carbon. It has also been shown for corals and foraminifera that many species will generate the same slope of δ18O vs. δ13C for a growth environment that does not change with time. This so called "vital effect" is not well understood mechanistically but is thought to arise from a kinetic fractionation associated with the hydration of CO2(aq) in the calcifying pool. This effect is dramatic in deep-sea corals (see figure). Not only is the full range over 12‰ and 4‰ for carbon and oxygen respectively, but there is a break in slope at the lightest values. This slope change requires that the "vital effect" mechanism be something other than kinetic. There is no way to continue to kinetically fractionate oxygen and stop fractionating carbon when they are attached to the same molecule. We are exploring a new thermodynamic model for this fractionation that should be ubiquitous for all biogenic CaCO3. Implications of this model for the metals we employ as paleo-tracers are also an active area of research in my lab. For a pdf version of our recent paper on this subject (submitted to GCA) click here for text and here for figures.