Geophysics graduate student Oliver Stephenson, who will graduate next month, will head to Washington, DC, in September on a William L. Fisher Congressional Geoscience Fellowship to help policymakers base decisions on solid science. 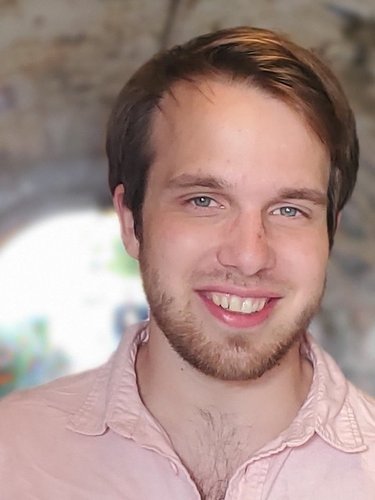 The fellowship lasts one year and Stephenson intends to use this opportunity to help launch a career in science policy, working with government officials to ensure that science informs decision-making. He plans to use the scientific training he received at Caltech to try and make the world a better place in the most direct fashion he can.

"I've always been interested in communicating with people and having a positive impact on the world," Stephenson says. "But the pandemic has shown me how science can and should be used to make the best decisions, and what happens when science isn't used. You see the enormous inequities in outcomes."

A geophysicist by training, Stephenson's main areas of interest in science policy are climate change mitigation, natural hazard preparedness and response, and the ways in which artificial intelligence (AI) will shape society.

Though AI might seem out of left field for a geophysicist, Stephenson took a class in 2019 called CMS270 - Advanced Topics in Computing and Mathematical Sciences, which connected scientists with AI experts. In the course, Stephenson helped develop a method for mapping collapsed buildings after natural disasters. The class was established by Richard Murray, the Thomas E. and Doris Everhart Professor of Control and Dynamical Systems and Bioengineering and William K. Bowes Jr. Leadership Chair of the Division of Biology and Biological Engineering; and Eric Schmidt, co-founder of Schmidt Futures and former executive chairman of Alphabet Inc.

Once in Washington, Stephenson will interview with U.S. senators, representatives, and others. After receiving offers for placements, he'll select one and get to work, either in a lawmaker's office or on a committee tasked with working on a specific problem. Stephenson says he hopes to spend the next year learning how Congress works, and how he can have a positive impact on the world by working with congressional leaders.

Funding for the fellowship is provided through an endowment established by the AGI Foundation to honor William L. Fisher, professor and Leonidas T. Barrow Centennial Chair Emeritus in Mineral Resources at the Jackson School of Geosciences at the University of Texas at Austin. More information can be found on the American Geosciences Institute website.